So I just went to see Bastille. Flawless. Effortless. Visionary. Tonight was the first leg of their first UK tour, and they pretty much start it with an (please excuse me for the use of the word) epic performance. Having discovered them through a friend less than a week ago, expectations were high. From the first electronic note to ending beat, the set was breathtaking.

Diving straight into “Icarus”, lead vocalist Dan Smith- from South London- commands the room, swaying side to side against his keyboard, sporting one of The Colonel’s KFC t-shirts, sleeves rolled up as high as the white cotton permits.  Occassionally he glances at his fellow keyboardist, slicking hand through hair with a cheeky smile, while singing those articulate magic words into his mic. This fast flamboyant song based that good old thing called Greek Mythology grants upbeat melodies and harmonies, perfectly synced.

Completed by drummer, guitarist and backing keyboard/vocalist, Bastille play straight through into “Laura Palmer”, seducing all those chanting the words back towards the stage. The crowd grows and swells. It  fills the venue with pumped bodies, made up of females dancing at the front to men casually nodding their heads at the back of the room. The band reveal new song “Things We Lost in The fire”, urging all and sundry to”Join in and sing!” their Lion King-esque ooh’s and ahh’s in the chorus. 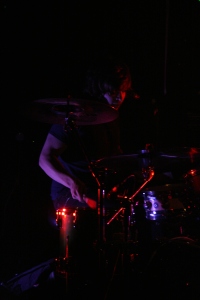 Unfortunately, the magic has to end sometime. Wrapping up the set with “Flaws”, musicains are moved to different instruments for the finale, ending the perfect set with the perfect performance.