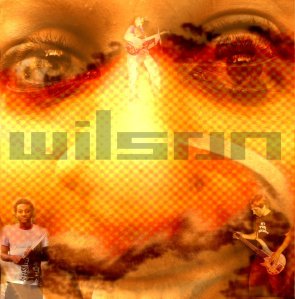 “I hit my 25th birthday and I was just like oh my God, my life is slowly drifting away” says Wilson’s front man Ross Wilson; “and I haven’t achieved anything that I wanted to achieve, and so I was like I’ve really got to make something of this band.”  After a two year break from music, Ross Wilson, who hails from Slough, decided to form a band with his brother and an old school friend. “It’s always been about a band for me really.” He says.

In 2006, Ross suffered from psychosis, forcing him to be sectioned and hospitalised. “Yeah, that was fun,” He said sarcastically, “believing I was Jesus Christ, believing in signs from the universe, and going off to America on a spiritual quest.” Looking out the window at the beautifully concrete covered Slough High-Street, he continued; “I went to New York to get in touch with my…” By now he seems lost for words, but is happy to divulge his experience. “being-ness, with my soul, and my higher self and all this stuff. So that was fun.” It’s strange to think that the man sitting so calmly, with a smile beaming from ear to ear, has been through so much in the past few years. “The whole recovery process from psychosis is really long,” he said, “so like you have the madness, and I had it for about two years, because I didn’t want treatment, I wouldn’t take the drugs they were offering me. When I finally did, I came back to normal, but then I was really depressed and totally suicidal.”

It seems that Ross’ determination to re-build his music roots, and his band, is what brought him out of his suicidal state. Focusing on the band now, he becomes animated as he talks about the future for Wilson. “We’ve been doing demos of our latest stuff.”Completed by Owen Wilson (Bass) and Graham Henderson(Drums), Wilson have recently released their debut album ‘Consumed in Self’, which is compiled of the same tracks as on Ross’ solo album ‘Yet to Be Named’. “I want to keep all those recordings so we can play them live, but we had to change the artwork. So we re-branded it. It took a long time to do that though.”

The band have also entered the Surface Festival, with the first round taking place on the 18th April in Great Portland Street. “The Surface Festival? Yeah! It’s pretty sweet.” Ross explains that winning this competition could mean big things for Wilson, the prize being over £10,000 worth of equipment and PR, plus a slot at Sziget Festival in 2012. “We’re going to try our best and I’m going to keep going. Say, like, we don’t get through this first round there’s going to be something else coming around the corner, you know? Keep going, it’s not going to affect our stride.”

Wilson’s music is a mixture of Ross’ influence, such as muse, NOFX and The Red Hot Chilli Peppers. The band have recently appeared on various radio stations and are playing any shows available through the Music charity, SWIPE, as well as Surface Fest. ‘Consumed by Self’ is available on Amazon and itunes now.

It seems that Wilson will not take no for an answer, and are “determined to take over the world of rock music, becoming the best band they can be and the best band in the world.”