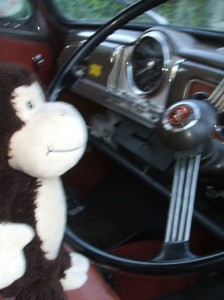 The M25 is one of those motorways that we love to hate.  It’s notoriusly known for its never ending traffic and variable speed limits, as well as constantly being resurfaced and widened. Being so close to London, this motorway seems to bring out the bigwigs in their Land Rovers and Porches who have no regard for other drivers!

I know I certainly hate it. For one, you get those slow moving lorries that we have to constantly hang back on as they swerve uncontrollably once they go past 50mph. Then, when you think it’s possible to overtake and stray from the ‘loser lane’, it’s ridiculously impossible, due to the wankers who drive too fast and think they have control of the road.

Once in the middle lane you are then pressured, (particularly when you drive a Morris Minor) to get back into the slow lane where at least it is mildly safe. Then the issue of turning off or choosing the right lane arises. The pressure is enough to give anybody a coronary! And if you get in the wrong one… you’re fucked. Traffic is also a pain in the ass as The M25 seems to want to keep you moving at 40mph when there is no reason for it!